skip to main | skip to sidebar

So after many years of shouting into the abyss, I have decided to pack up shop here at TR. It's been a great run (if a bit sporadic of late), and I'd like to thank all (3) of you for following along. I'll probably keep everything up, at least for now.

But but but! After getting some adverse employment news, I decided to finally start a blog that my gf and I talked about doing over a year ago; chronicling peoples' reading choices on public transit in San Francisco. For those of you from areas without any sort of bus or subway system, this might seem like an odd idea, but here in SF, keeping an eye on what people are reading on the bus has been a hobby of mine since I moved here. And I'm a bit of a book worm, when time permits.

So if any of that sounds interesting, come check us out at:

We'll also be doing guest posts at another great blog for the commuter, Muni Diaries!

Posted by the default attorney at 4:48 PM 3 comments

My Dad and Toyota 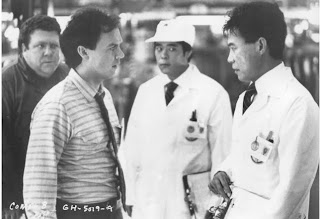 Image from the movie Gung Hu, available here at IMDB.
My father only bought American cars. He thought imports, primarily the asian ones, were not as safe or reliable. He used to tell stories that I have never attempted to verify about people suffering from kidney failure because the shocks on their Toyota trucks were so bad.

But at the time, the Asian auto industry, especially Toyota, was in full upswing. When it seemed everyone around us was buying Honda minivans, and those Toyota 4Runner and those boxy Tercels were all but ubiquitous, my family always had GMC trucks. To his credit, we did live in the snow, and the one we bought in 1985 still gets my mom around town.

But I remember thinking at the time that my dad was behind the times. It seemed to be the general consensus that the US auto industry that was having quality-control problems, and that you actually got more for your money if you bought an import. I couldn't really tell if my dad was just afraid at the time that the Japanese would take over the auto industry, or if he really thought American cars were better. Despite my father, the ascent of the Asian auto industry, and especially the Japanese car maker Toyota, seemed unstoppable.

Between last year's bailout of the US auto industry and now the abrupt decline of Toyota, I am just baffled at what has happened to car makers.

I watched the beginning of the testimony this morning, and it was awkward, but I saw our congress members not really realizing (as many Americans didn't in the 1980s) that the Japanese culture is significantly different from our own. In one exchange some representative seemed to berate Mr. Toyoda for not seeming to show adequate remorse for those who had lost their lives in Toyota vehicles. The Japanese though, are known to show little emotion, especially in formal situations. If anything though, I thought the fact that this congressman, who didn't know any of the victims personally, was being a bit brazen by judging the adequacy of someone else's remorse for his own political shots.

I don't really have any interesting insight so much, but as I watched this testimony this morning, while on the treadmill, I just felt that this whole thing keeps going around in cycles.

Posted by the default attorney at 5:03 PM 1 comments

Labels: Congress, my dad, Testimony, toyota prius, what a feeling

Believe it or Not!! Gitmo Guard and Detainee Voluntarily Reunited

Gitmo continues to become more and more surreal. I thought ethnic Uighurs in Bermuda was weird. How about this bit? 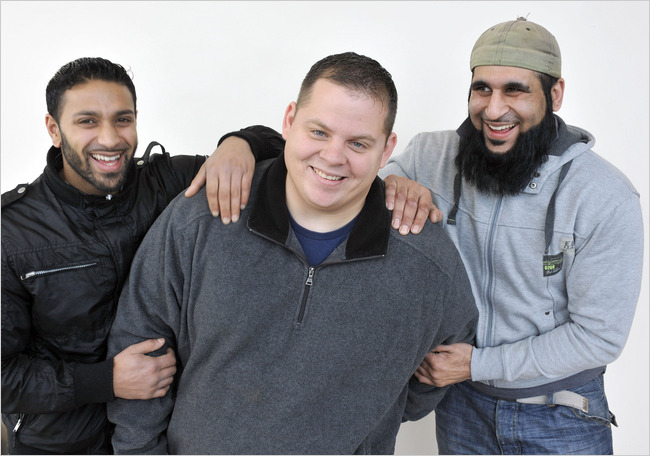 Image from Jeff Overs, via NYT, and Gawker.

Posted by the default attorney at 12:13 PM 0 comments

Convenience Is the Not So New Handling

Don't you just love it when you go to buy two $25 concert tickets, and somehow the total is $80? Not even considering why they charge you for the transaction/shipping/handling when you print out your own fricking tickets from automated software, why do they charge you for a "convenience" fee?

We are supposed to pay an extra $8 a ticket for the convenience of buying them online? I thought that online purchases were supposed to make prices come down because it was more convenient for the supplier since they no longer had to depend on brick and mortar businesses to have employees to sell the actual paper tickets.

Maybe I just misread all of those econ textbooks, scholarly articles, newspaper and magazine articles. For like, years.

I bet these fees are only going to get more "convenient" now that Ticketmaster and Live Nation are going to merge. It only makes sense, now that the concert promoters are merging with the ticket sellers. Unless the DOJ comes in to save us from this incredible convenience (please?).

As long as we're on the subject, I never understood what the hell "handling" was anyway. "Shipping" I get. It costs money to send things, and shipping could depend on where the purchaser is located. But "handling"? Is that like the cost of picking the Slap Chop up and putting it in a box? That's not covered by "shipping"? Maybe I should shut it, otherwise they might start charging us for pre-purchase storage, dusting, and cigarettes for warehouse employees. Maybe next will be a "looking" charge, because they need to see the product before they can "handle" it and then "ship" it.

Posted by the default attorney at 1:57 PM 0 comments

I Repeat, THERE IS NO PARTY IN THE CASTRO On October 31 But there will be the other 364 days of they year

Posted by the default attorney at 10:31 AM 1 comments

If it turns out the free kayaking is more than 1/2 mile away, I am going to be pissed.

I'M SEEKING A MATURE, DRAMA FREE WOMAN TO SHARE MY APARTMENT WITH ME. PLEASE READ THIS AD IN ITS ENTIRETY AND ONLY RESPOND IF YOU ARE COMFORTABLE WITH THIS UNIQUE SHARE. First, let's face the facts: The politicians tell us we're in a deep "Recession" but the truth is we're in a Depression -- and it's only going to get worse! So let's help each other during these hard financial times. That said, I have a huge 1,600 sf apartment in the exclusive West Village ("The Gold Coast"), overlooking the Hudson River and and riverside parks where one can jog, bicycle or simply walk along the river's edge for miles. Amenities include roof deck with spectacular views of NYC and the Hudson River, full-service laundry in the basement, 24 hour doorman, AC, Cable TV and high-speed internet connection. There's free kayaking about 1/2 mile from my building during the summer months. My apartment's market rent is $4,200. per month. Your share of the rent is only $275. including all utilities. We will share the apartment including the master bedroom. True, this is an unusual situation, but it's necessitated by the fact that I have a second bedroom which is presently occupied by a female friend. Would you like to share a great apartment and a very comfortable Queen-size bed with a person who is respectful and sensitive to your needs? Send me a short message and a recent picture(s) of yourself. I've included a picture of myself in the lower right corner of this ad. I believe "A picture is worth a thousand words." NO PICTURE, NO RESPONSE. Contact: scubadobedo@yahoo.com

Posted by the default attorney at 1:09 PM 1 comments

According to the AP article:

The case involved a woman whose bong had about 2 1/2 tablespoons of liquid that tested positive for methamphetamine. A narcotics officer had testified that drug users sometimes keep bong water to drink or inject later.

Really? Drink the bong water? Eeeew. Although where does it stop? What about pipes? That would be paraphernalia, but I'm sure you could probably scrape out stuff or lick it or something. If your pipe or one-hitter has enough residue, could it too be considered the equivalent of the controlled substance?

Plus, isn't it really cold in Minnesota? What else are they going to do up there? And will they still bet their friends $20 to drink the bong water?

Posted by the default attorney at 9:55 AM 0 comments

I remember watching him in the early days of the WWF, when I was a wee boy. He used to fight when he was younger, but I remember him as a manager, along side such early WWF giants as, well...Andre the Giant, Hulk Hogan, and some lesser known wrestlers like the Iron Sheik, and Hacksaw Jim Duggan.

He used to wear these weird rubber band piercings on his face, which really didn't make any sense. Oh and then there's the Cyndi Lauper thing:

He passed away today, at the age of 76. Thanks for the memories Lou!

Posted by the default attorney at 9:56 AM 1 comments

Anyway, at the End of the Day, "Whatever" Is What it Is

According to a study funded by bespectacled high school teachers conducted by the Marist poll, the word "whatever" was voted by study participants as the most irritating word in the English language. The runners-up included "it is what it is," "you know," "anyway," and "at the end of the day."

First, I don't think it's fair to pit one word against a phrase, although CBS doesn't seem to know the difference. And at least "whatever" actually connotes a feeling, albeit a dismissive one. It takes the phrase "it is what it is," five whole words to say absolutely nothing. This phrase is used a lot around my office, and it makes me grimace, because it usually means "we kind of fucked this up and now you have to deal with it," but since no one wants to take blame, it is a nice way to distance themselves from the train wreck, act as if either evolution or God made the train wreck, and then make someone else clean up the train wreck.

And I'm surprised "like" didn't make the list. Being a Californian from birth, I can say that this word often makes up 25% of conversations, especially those that take place south of Monterey.

This whole study is literally a waste of time.

Posted by the default attorney at 10:28 AM 0 comments

Daily Candy Is Getting a Little Out of Control

Yes, I get Daily Candy emails. No, I rarely read them, though sometimes they will announce the soft opening of new restaurants and other interesting local events. Often, when I've looked at them they will be thinly veiled advertisments for local artists slinging "highly affordable" jewelry one $400 bracelet at a time. Given the economic enema colonic Gigli recession of the last 14 months, these ads seem even more absurd.

But I decided to take a look at one of the emails they sent me today. It involves the launch of "neck accessories." My initial smirk was somewhat mitigated by the cute picture in the email. 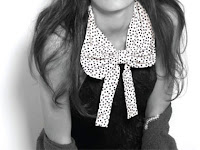 Oh, ok, maybe this will be an interesting way to update an old top. But unisex? I click on the link. Even Sergei the model doesn't look very happy about the $171 Mayflower doily he has around his neck. 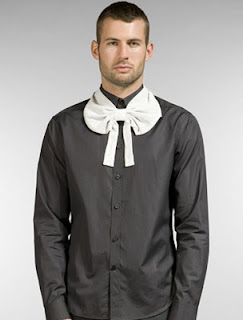 Posted by the default attorney at 10:18 AM 3 comments

Waiting for the bus or some nice chairs? Posted by the default attorney at 10:50 AM 0 comments

Stuff That Is Well-Written, Interesting, And/Or Amusing